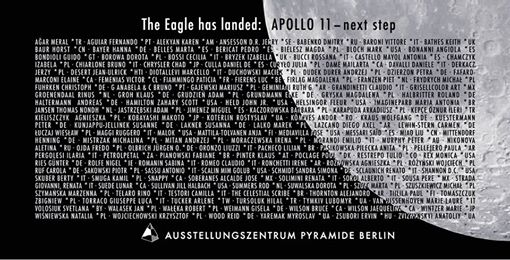 Mail-Art ∙ Collages ∙ Paintings ∙ Installations ∙ Video
An international art project with works by 157 artists from 35 countries.
Invitation to the opening
Introduction: Wojciech Różyński (Curator)
Music: DUBSPACE // BLUM, experimental soundscapes
Duration of the exhibition: 25 February to 25 March 2017
„The television transmission of the landing on the moon in 1969 was watched by almost 600 million people worldwide. 2014, 45 years later, the Polish artist and curator Wojciech Różyński published an open call in the internet inviting to recall this historic event with artistic means. Established and unknown artists from all corners of the world participated. They sent him mail art, photographic works, collages, paintings and installations. The exhibition shows how the impact of the event has inspired individual visions in manifold ways. Commander Neill Armstrong who was the first man to step out on the moon expressed the overwhelming feeling with the much-cited saying: One small step for a man, one giant leap for mankind.
A major focus of the presentation in Berlin-Hellersdorf are larger paintings, photographic works, objects and installations.
The exhibition has so far been shown in the Gallery Dzialan in Warsaw in 2014, then in the BWA Gallery in Zielona Gora and the Wozownia Gallery in Torun in 2015 and last during the annual festival at the Culture House in Podkowa Lesna in 2016.”
Gisela Weimann